How to recover an Amazon suspended account? Ah. That big question mark.

Amazon calls it “removing your selling privileges” when the actual situation is “your account has been suspended”.

The short explanation is that Amazon is a private company that is managed by some (more or less) savage rules.

You have gone there to sell and maybe you have not read properly aaaaaaall the conditions or, even having read them all, interiorized, printed and highlighted the most important paragraphs.

There has been some sort of problem that on a way or another a little bit more discretional have made you to not accomplish with their politics.

This was the sort answer.

The long explanation is quite a little bit more complex because it means getting more in depth into the main reasons of what means losing your Amazon seller privileges.

When your account is suspended, Amazon notifies you and also tells us (more or less) about what’s the specific reason and the products (the ASINs) implied on the decision.

Let’s break down the most common reasons for an account ban:

You already know that Amazon is obsessed with the client and that is why they give a lot of importance to make sure that all of their sellers  fulfill, to the most effective way possible, their commercials compromises.

The data is on the table because for them everyone that do overlap those numbers are in a high potential risk of getting suspended for a performance issue:

The the percentage of orders that may have received bad reviews, claims for guarantee vulneration for A to Z or clients that may have ask for the money on return to their credit card. The ODR should be under the 1%.

The rate of cancelled orders by you as a seller before it being shipped for whatever reason it might be and that could only be attributable to the seller. The PCR should not be higher than 2,5%.

The number of shippings that have not being confirmed on time divided by the total of shipments in a determined period of time. The LSR never should be over a 4%.

All those factors influence what we call the “Seller Performance” and those are the basic metrics that Amazon do take as a reference to evaluate us as sellers.

The good thing is that you can know the health of your account in any moment through the Customer Metrics tool that you can find when you log in to your account, it is not something to pass on so I do recommend you to monitorize it with attention.

It is usually said that Amazon sells anything.

A company I was recently in touch with got suspended for this reason in Germany.

They were selling on Amazon’s pan european program (that means selling in ES, DE, UK, IT and FR) and, just for an ASIN, they got suspended in DE. That is how specific bans are, so beware.

Amazon sells everything that Amazon allows to be sold. There is a quite large list of products that we could say that are forbidden and that do have a prohibition, if Amazon do detect any of these kinds on our listings we may have a problem… or a couple of them.

If you got suspended on FBA, Amazon can destroy your products

First of all they reserve the right of suspending your account, but they even, as in the FBA case could destroy all our stock storaged at their warehouse without we even seeing a buck.

They would also reserve the right even of starting legal actions in case that our products are against the current law on the legal normative of the countries you do sell. So funny.

Which are those products and categories restricted?

Well, they are quite a lot and do depend a lot on so many variables so the best you could is to read the list and check it for yourself.

It is just as complicated as, for example, selling human skeletons for medical purposes and of investigation or human hair to make wigs, buy you cannot sell organs or any other human fluids.

The selling policies also influence the community rules and the performance of the platform.

When you create an account you compromise, for example, to maintain a polite relationship with the clients and maintain an updated and certain information of your business and account.

In fact, many times when they proceed to suspend an account the sellers try to open another one and that, my dear friend, just make things worse and makes that we are already infringing the selling policies.

The list of infractions is long, something that also implies a lot of factors: from the intention of making the user to go buy to your shop out of Amazon, the direct communications with the client that may not be strictly needed or requested by them and related with the intellectual property or with the rights over some commercial brands.

Actually there is just one type of suspension: are you or are you not suspended.

What is true is that there various states inside the same one:

Just that, you cannot sell on Amazon. At least for the moment being there is still a way to ask Amazon to reconsider the decision sending them a POA (Plan Of Action) on how you’re going to fix the issue. 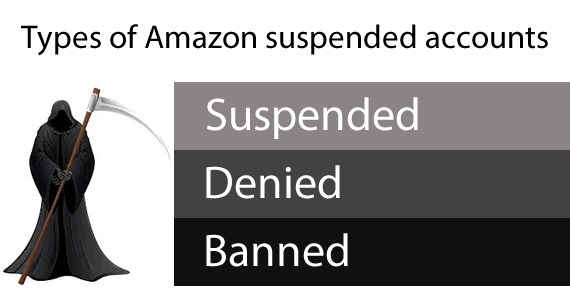 You have submitted your reconsideration with a proper action plan but the account is still denied. Wll, you can still try to fix the problem so that’s not a permanent ban.

C’est fini. You cannot sell on Amazon and there is no coming back.

Of course you do! That’s the only thing you can do when you are banned. Just make sure:

Exactly. You need to create a new Ltd. Yup.

For me, this is just a desperate option, mainly because opening a new account means a direct violation of Amazon’s legal policies so, just imagine you went through the process of creating a new company and you got catched anyway…

How do I know if I’m banned?

The most evident thing is that you are going to stop selling. There is no need of being Sherlock Holmes to know that something’s not working.

After that, Amazon notifies you in a direct way that your privileges as a seller have been suspended.

In this notification you are told also about the reason (typically any of the three we have talked about) and the ASIN list inside your listing that have caused the suspension.

The first advice is a crap but I do have to tell you: not losing it.

For real, there are a lot of variables and there can always be room for things to happen that you cannot control, ok, I know. But whatever it is on your hand, whatever you can control, do not let it slip.

Have a proper review of the politics and keep your metrics as a seller crystal clear but, even though you still receive an advice of going against the politics (do not get confused with a suspension) prioritize solving the problems that are being put on the table by not going to the deadline of the 60 days that they give you to do so.

Be quick or be dead

I love that Iron Maiden song.

When it is already too late and they have already fined you, you better hurry up. You gotta be quicker as possible with the arrangements you need to take and show a solid detailed action plan (POA).

Firstly because there is a way of selling quickly and secondly because they do not guarantee us that there may be a second chance to specify stuff or complete the documentation. Sometimes you do go from suspended to banned.

You may want to check this post on Seller Central’s Forum: How to Write a Plan of Action When You’ve Been Suspended 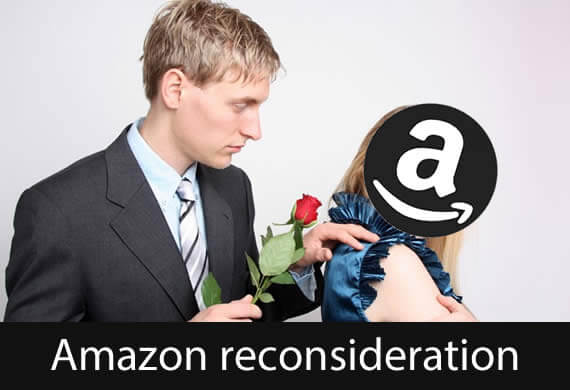 First I am going to tell that these are business and you have to take them as that. Swearing, asking for vendetta, sending a photo of kids with pity faces or asking for a duel at the cemetery is not an option.

Don’t get to emotional because it is not going to work and can only make things worse.

On the notification you should have pretty clear the motives of the suspension so you better revise and make some self-judgement.

If even then you do consider that they do not have full reason on what they have done… bad luck because you gotta give it to them. Amazon is a private company, with their rules and that do have their right to choose who is going to sell on their site and who cannot.

They do not have any obligation towards you so you better have that in mind when thinking about your action plan and the way you are going to focus it.

You better crouch your ears and recognize what they are attributing yo you. Always put the focus onto the client and assume your responsibility. It is important that you show compromise and will of fixing the situation.

You do have to show specific actions so there is not just a light consideration, some “I have being a bad boy and I would never do that again”.

If your problem comes for many negative critics for the logistics, stock problems or for their incorrect use of the products you can ask to go to the FBA for example, and I am pretty sure that they even like it even though for you it means receiving less fringes (specially if you are basing your business on Amazon which is something I would not recommend you for exactly things like this).

They are not pretty specifics when it comes to what they want so there are some things to our criteria presenting something actionable and that do represent a prompt solution to the problems that have driven us to this point.

Try to solve it on the first try so it does not extend on the time.

When talking about the way of solving it, do not make it quite difficult and try to be precise and synthetic. Not by giving them 30.000 characters they are going to take you more in consideration, in fact I would dare to say that it may be counterproductive. 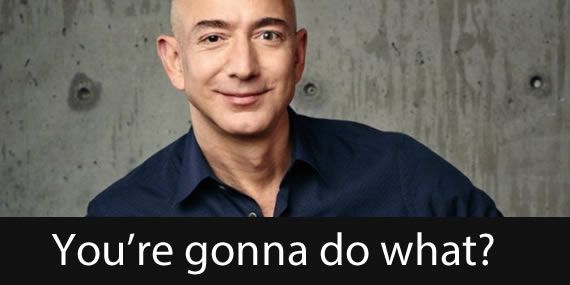 The POA do’s and don’ts

Having your Amazon account suspended may end up being a grave problem and trying to solve it may take time and a large amount of energy waste. My main tip above all of this is turns out to be the first shitty tip I have already told you but may be the better one possible there it to be: do not mess things up and you would avoid problems.

The good thing is that we do have the game rules clear, the important metrics that you do have to have under control. Take them seriously and keep them under control at any moment, that is how you would avoid any type of story. 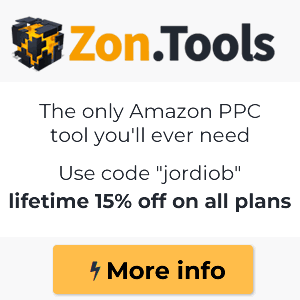